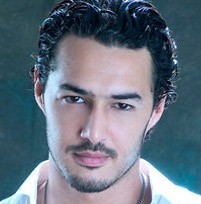 Ahmed Haroun began his career as a model, before ending up as an actor. By chance, Haroun happened to be in the right place at the right time; He was accompanying a friend to a casting for a TV, and the director there immediately noticed him. Even though he wasn’t officially applying for it, he ended up getting the job!
Ahmed Haroun first did many advertisements and would also sometimes appear in music videos. He starred next to famous Syrian singer Assala Nasri in her music video clip for Tasawar.

Ahmed Haroun's breakthrough came in 2002 when he was casted for a role in the movie "Sahar el Layaly". The movie was a box office success, making Haroun the most desired Arabian heartthrob of the time. He also appeared that same year in "September 11th" by Youssef Shahine. In 2004, Haroun got his first leading role on the big screen in ‘Farah’.

Help us improve this page:   Correct or update the Ahmed Haroun page