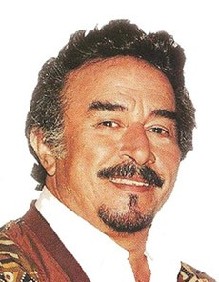 Abdel Majid Majzoub also known as Abdil Majeed Majzoob is a famous legendary lebanese actor from the 70s and 80s.

Abdel Majid Majzoub was mostly known for his role with lebanese actress Hind Abi Lamaa in the hit television series of the past - Allo Hayati which means Hello my love.

Abdul-Majid Majzoub was also famous for his many historical roles, such as Imroe el Quayss and Al-Mutanabi.

Abdul-Majid also has the role of the narrator in "The Adventures of Al Sindbad" One of the most important animated cartoons in history.

Help us improve this page:   Correct or update the Abdel Majid Majzoub page