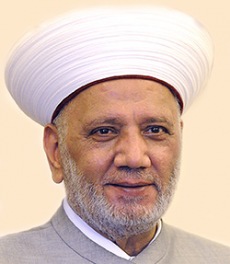 After his election and during a special speech, Derian said that what happened today is an expression of the strong will of all the muslims in Lebanon. Their will to face the problems and stress the role of Dar Al-Fatwa.

Judge Sheikh Abdul Latif Derian was born in Beirut in the year 1953. He obtained a licentiate in Theology and Islamic law from the Islamic University of Medina, and continued his postgraduate studies at Al-Azhar in Egypt. He received higher studies in the Ain Shams University Cairo, and received multiple licenses in various Islamic sciences.

As soon as he was elected as the Mufti, the Lebanese House Speaker, Nabih Berri, contacted Sheikh Derian congratulating him on his new role. That same day Former Prime Minister Saad Hariri hosted a special lunch in Honors of Mufti Abdel Al Latif Derian.

Help us improve this page:   Correct or update the Abdel Latif Derian page