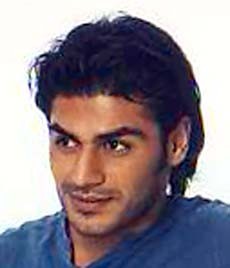 Aamar Lteif love for sports especially kickboxing started at a very young age. Aamar Lteif is an Arab and Iraqi champion in karate. He is a member of the national team in Iraq and has taken part in the international and world championships.

Lteif has specialized in the field of education and sports. Eventhough he has been a TV host and model for many year, he is more interested in sports.


On Television, Aamar started his career as a weather man weather in Al-Iraqiya, a Television operated by LBC and targeting the New Iraq.

Sheikh Pierre El Daher and his wife spoted Aamar in the Studio one day and offered him a role in the Entertainment Show 'Hoakm'. The program aired for few years on the Lebanese Broadcasting Corporation - LBC.

Soon after, Aamer entered the field of video clips and took role in the successful clip of Cyrine Abdelnour called Law Bass Feini. He also played the leading role in a clip for Nawal Al Kuwaitiya.

In 2006, Aamar Lteif started hosting Akher Al Akhbar, an Entertainment News program which aired on Rotana Music Television. He hosted this program along side other known names such as Youssef El Khal and others.

Help us improve this page:   Correct or update the Aamar Lteif page