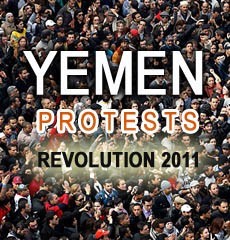 Major protests in Yemen took place in the month of Febraury and March 2011, following a similar line of protests in other major Arab countries.

The protests aimed to stop President Saleh from claiming another term in 2013.

As a result of the initial protests, the MPs of the ruling party resigned from the government.

35 People were killed in the protests which took place in Yemen.

The 2011 Yemeni protests followed the footsteps of the Tunisia Protests and occurred simultaneously with the Egypt Protests.

The protests started as a shout out against unemployment and the bad economic conditions in Yemen. It later moved onto other demands such as corruption of the government as well as against the government's proposals to modify the constitution of Yemen.

The protesters escalated their demands by asking President Ali Abdullah Saleh to resign at once.

The biggest protest in Yemen took place on the 27th of January 2011, when more than 15 thousand protesters marched through the city of Sanaa voicing out their demands.


On the 2nd of February 2011, President Ali Abdullah Saleh announced that he would not run for another election in 2013 nor would he give control to his son.

More than 20 thousand people protested against the government in Sana'a on the 3rd of February. Many others protested in the city of Aden in what was called by Tawakel Karman as a Day of Rage.

That same day, thousands of soldiers and armed members of the General People's Congress party held a series of pro-government rallies in the city of Sanaa in support of President Saleh.

On March 17th, Yemeni security forces used live fire and tear gas on protesters in Taez demanding an end to the rule of President Ali Abdullah Saleh, wounding at least 84.

The situation escalated dramatically: After being injured in an attack Friday 3rd June 2011 on the Presidential Palace that killed seven guards, Saleh left Yemen for Saudi Arabia to receive medical treatment. Singing and dancing demonstrators took to the streets in Yemen's capital to celebrate the departure of the country's long-time dictator.

Help us improve this page:   Correct or update the Yemen Protests page