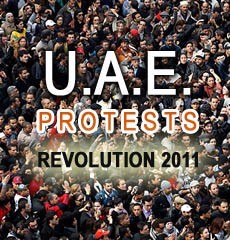 The Protests in the Middle East and North Africa that began in January 2011 are gradually leaving repercussions on the United Arab Emirates situation.

Protests in UAE were very discreet during the months of January and February 2011.

It is said that the first official large scale UAE protests are scheduled to take place on the 25th of March 2011.

Just like most other protests in the Middle East, the activists and protesters are using various websites and networking sites to promote and spread the word around for the protest dates and locations in the UAE.

It is still unknown where exactly in Dubai and Abu Dhabi would the protests take place on the 25th of March 2011.

The Gulf region is under tough control, and any slight move is smothered right away. UAE is part of the Gulf Cooperation Council (GCC).More than 1,000 Saudi troops and 500 police from the United Arab Emirates took up positions in Bahrain on 14th March 2011, to help the royal family control the pro-democracy protests.

Help us improve this page:   Correct or update the UAE Protests page