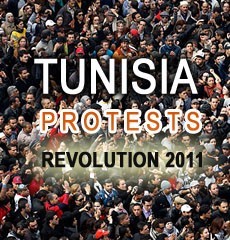 The Protests in Tunisia are thought to have triggered most of the following revolutions in the Arab region that completely reshuffled the political scene. The French referred to it as 'Le Printemps Arabe'. It took the world by surprise, as no one expected such dramatic events, not even American intelligence.

Although it was dubbed the Jasmine Revolution, the Tunisians prefer to call this middle-class rebellion the Popular or National Tunisian Revolution 2011.

Protagonists and Leading Participants in the Tunisian Revolution


The protests were originally organized by the Tunisian Youth like internet activists on social networking websites such as Amina Ben Jemaa. Demonstrators of all age groups and social classes later joined the protests creating an unstoppable momentum.

Al Jazeera TV played an important role in informing the Tunisian and Arab public of what was really going on, thus providing the emotional and psychological support for the revolution. Many known activists were given more exposure during these events, such as Kamel Jendoubi, Sihem Bensedrine, Mokhtar Trifi, Sana Ben Achour, and many others... Even those outside of Tunisia like Kawthar Al Bashrawi were doing what they could to support the revolution.

Before that, Al Akhbar website was hacked by Tunisian officials for publishing classified information revealing the corruption of the regime.


The Tunisians held demonstrations across the country to fight against poor living conditions, high unemployment, inflation, corruption of the government. People were also protesting against the lack of freedom of speech in Tunisia. The main slogan was "Degage!".


The Protests in Tunisia began right after the self-immolation of Mohamed Bouazizi, on the 18th of December 2010. Nationwide protests were carried out in public areas.

The protests called for the ousting of President Zine El Abidine Ben Ali, who was forced to step down of power.

Prime Minister Mohamed Ghannouchi took over for a short time before resigning also. Yadh Ben Achour was appointed president of Tunisia's Higher Political Reform Commission on On January 17, 2011 by the latter.

Many political prisoners were released.

The political police and the former ruling party was dissolved.

Many exiled figures returned home such as Rashid Al-Ghannouchi, the 69-year-old leader of the Tunisian Islamic movement. Al-Ghannouchi’s return was the most potent symbol yet of the dramatic changes that have taken place in Tunisia in recent times. Ghassan Bin Jiddo also visited Tunisia after a long exile in Lebanon.

Restrictions on free speech and political life were lifted.

The government promised elections in July to select a commission to draft a new constitution.

Hundreds of demonstrators gathered in the main promenade of central Tunis for more than three days to protest against US secretary of state, Hillary Clinton's visit on March 17, which they described as US interference in Tunisia's home-grown revolution. Clinton met with Fouad Embazza, Tunisia's interim president.

A Tunisian Reform Commission, or The Forum for the higher goals of the revolution, political reform and democratic transition saw its name enlarged and gradually its original number of members increase from 11 at its creation on 27 February, to 70, to 130 on 24th of March. The enlargement of the High Commission responsible for preparing the election of the Constituent Assembly on July 24, is believed to have provided a political alibi against accusations that the body is actually controlled by figures of the former regime of President Zine El Abidine Ben Ali. The committee is chaired by a professor of law, Yadh Ben Achour a pro Ben Ali figure. In fact, as events would show, the Commission was a forum for Tunisian economic interests and their accomplices in the trade unions and official 'opposition' political parties trying to stifle the protests of the working class, thus creating a new legal basis for a capitalist system in Tunisia. The events also quickly showed that the commission had no popular support. On March 23, while the commission met behind closed doors, outside people showed discontent by protesting in great numbers. Dradually members from the commission began leaving it, starting with Assya El-Haj Salem and Rached Ghannouchi.


More than 225 people died during the events. This was still considered a very passive and low cost revolution in comparison to the ones that were to follow in neighboring countries.


A short promotional video on Al Jazeera in support of the Tunisian Revolution 2011 was one of the first products of the revolution to become iconic. The video featured an old man crying in happiness while regretting the lost years his generation spent under the dictatorship, and in another scene another man screaming in the deserted dark streets of Tunis telling people to come out of their homes and saying repeatedly 'Ben Ali ran away, Ben Ali ran away!'...

The Tunisian revolution set an example to follow for the other Arab countries also suffering from dictators backed by the west. This is why both the leaders and the people could not help but compare between them.
The next country to be immediately infected by the virus was Egypt. The weird coincidences observed startled many:

-Another strange coincidence is that their fall came one day after their third speech.

Help us improve this page:   Correct or update the Tunisia Protests page