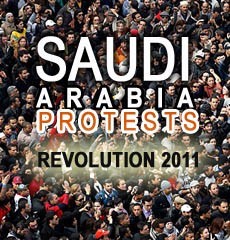 The protests were triggered by Self-immolation and some minor demonstrations in a few cities.

On the 29th of January 2011, hundreds of Saudis protested over poor infrastructure in Jeddah after a flood took place in the Kingdom.

It is worth mentioning that an online campaign for major political and economic changes was launched in the Kingdom of Saudi Arabia. Many activists also called for a Constitutional Monarchy in KSA.

Few other smaller protests took place in the month of February in the cities of Qatif and Al Awamiyah.

On the 4th of March 2011, Another protest took place in the Capital city of Al Riyadh and in the city of Hofuf.

Thousands of security members were sent to the North East side of the Kingdom to insure control of the situation.

On the 10th of March 2010, 3 protesters were injured in Qatif by Saudi police forces who shot gunfire during protests.

KSA also interfered in other protests in the Gulf Region especially the Bahrain Protests. More than 1,000 Saudi troops and 500 police from the United Arab Emirates took up positions around the island, to help the royal family control protests.
Forces from the Gulf Cooperation Council (GCC) arrived in Bahrain Monday 14th March 2011 to help authorities restore order after violent clashes erupted over the weekend between protesters and security forces. The move was read by the Bahraini people as a clear breach of Bahrain''s sovereignty by foreign troops. The GCC troops, the policemen and the hired mercenaries attacked the citizens killing 4 and injuring more than 1134 in one day!

Help us improve this page:   Correct or update the Saudi Arabia Protests page