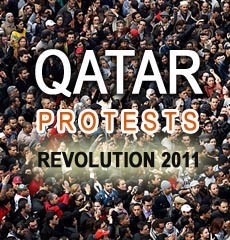 The Qatar protests started with a facebook group encouraging people to stand up against corruption.

On the 8th of February 2011, the Facebook page set the date of 27th February to protest against corruption and toppling the regime. More than five hundred people from Qatar supported the page by liking it.

Amir of Qatar Hamad Bin Khalifa, has for long worked on improving his image as a modern leader in the eyes of his people, the Arab World and even on the international scene. Al Jazeera TV also played a positive role in that perspective, by supporting the struggles of the Arab world against corruption or occupation, and often criticizing Arab governments. But his latest stands asking the protesters in neighboring Bahrain to sit with their leaders and quit their protests, in addition to Al Jazeera's low coverage of protests in the Gulf area, is all now putting to question his true nature. Many are also calling him a hypocrite.

Help us improve this page:   Correct or update the Qatar Protests page