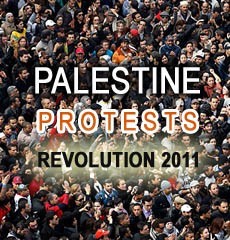 The Protests in Palestine 2011 were synchronized with other similar movements in the region that began with the the Tunisia Protests & Egypt Protests.

The protesters were not calling however for the end of a regime but were rather asking the different factions to unite and set their differences aside.

On June 5, on the anniversary of the Naksa, (the day of the setback-the 1967 Israeli occupation of the Syrian Golan Heights, the Gaza Strip and West Bank, including East Jerusalem and the subsequent forced expulsion of 300,000 more Palestinians from their land) groups of chanting demonstrators from Gaza, Lebanon, and Syria walked towards the boundary with Israel, singing and chanting in large demonstrations.
They called for justice, the end of the Israeli occupation and the right of Palestinian refugees to return to their land. Pro-Palestinian demonstrators also walked towards the ceasefire line from the Druze village of Majdal Shams in occupied Syrian Golan Heights. Israeli troops opened fire on the protesters, killing three demonstrators.

To note that in 1948 there was a forced expulsion of approximately 750,000 Palestinians from their land to make way for the Jewish State of Israel.

Palestinian refugees are yet to go back home, despite various United Nations resolutions, including UN Resolution 194 passed the year of the Nakba, Resolution 242 passed in 1967, the year of the Naksa or “setback,” and Resolution 3236, passed in 1974 and stating “the inalienable right of the Palestinians to return to the homes and property from which they have been displaced and uprooted, and calls for their return.

The prior Nakba Day demonstrations on 15 May 2011 saw more than a thousand Palestinians protest near Erez in Gaza’s north, as well as thousands more along the Lebanese and Syrian frontiers and in the occupied West Bank. At least 16 demonstrators were killed by the Israeli army, including one in Gaza, and hundreds wounded by a barrage of live machine gun fire, rubber-coated steel bullets and tank shelling. In Syria, some protesters were able to bridge the fence and enter the Israeli-occupied Golan Heights.

Rival Palestinian factions Hamas and Fatah also signed a unity deal in Cairo, an initiative that could show the Israelis are finally losing the battle with the Palestinians.

Help us improve this page:   Correct or update the Palestine Protests page