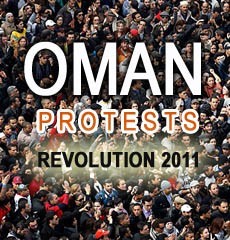 The Omani protesters insisted that they came in peace and were not defying Sultan Qaboos in anyway, even though he controls the country since 1970.

The protests main outcome was the Dismissal of ministers from the Omani Government. Sultan Qaboos of Oman also promised more reforms.

The protesters insisted that they wanted a better life and a reform to the old system.

On 28 February, the demonstrators burned a hypermarket in the city of Sohar and blocked the entrance to the Sohar port. The port of Sohar in Oman is a critical location which contains more than 160 thousand barrels of oil.

As a result of the uprising protests in Oman, the Sultan of Oman canceled a scheduled visit to India.

As a result of the protests the cabinet members got reshuffled as follows:

Maqboul bin Ali bin Sultan was named as the transport minister of Oman.

In addition the Omani Protesters asked Sultan to remove Maqboul Bin Ali Bin Sultan from his post as a commerce minister of Oman. According to the protesters, he is incapable of running the ministry of commerce.

It is worth mentioning that the eighty four members of the Shura council are elected by voters from sixty-one districts in Oman. However, the council has advisory power only and has no legislative powers what so ever.


Help us improve this page:   Correct or update the Oman Protests page