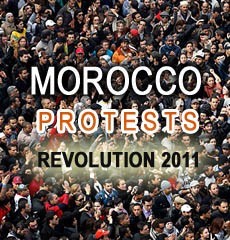 The 2011 Protests in Morocco started in January 2011. The demonstrations took the form of minor protests, with occasional attacks to buildings and public properties.

The Moroccans called out for major constitutional reforms to the country.

On the 20th of February 2011, thousands of Moroccans marched in Rabat, the capital city of Morocco, asking King Mohammed to give up his seat.

During the demonstrations, the protesters shouted out slogans saying "Moroccans want a change to the current constitution" and "Down with Autocracy!"

No major outcomes to the Protests have been reached so far, and the country is yet to witness more protests in the near future.

Help us improve this page:   Correct or update the Morocco Protests page