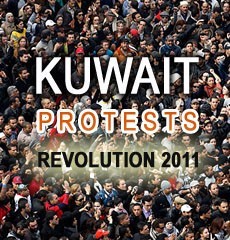 The protests in Kuwait started on the 18th of February 2011.

The protests escalated to clashes between riot police and bedouns.

On the 19th of February 2011, the Protesters in Kuwait clashed with security forces on the second day of the protests.

On the 9th of March 2011, Hundreds of Kuwaitis went to the streets of Kuwait City and protested. They asked for the Prime Minister Nasser Al Mohammad Al Sabah to step down from his seat.

On 15 March 2011, hundreds of young Kuwaitis demonstrated for reform in the oil-rich Gulf emirate and asked for the replacement of the prime minister.

Help us improve this page:   Correct or update the Kuwait Protests page