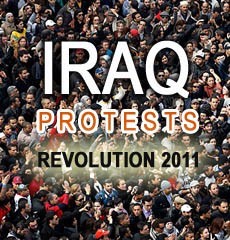 Many protests in Iraq started in the month of February 2011, in the form of major protests and attacks to official governmental buildings.

As a result of the protests in Iraq, many provincial governors and local authorities resigned from their posts.

In an effort to prevent more voilence in the country, Iraq Prime Minister, Nouri Al Maliki announced that he will not run for a 3rd term in the year 2014.

On the 12th of February 2011, Hundreds of Iraqi people protested in many Iraqi cities and villages such as Baghdad and Karbala. The people of Iraq asked the government to take serious messures regarding national security and federal corruption investigations. As a result of the Protests in Iraq, the government of Iraq decided to reduce electricity costs in Iraq.

Help us improve this page:   Correct or update the Iraq Protests page