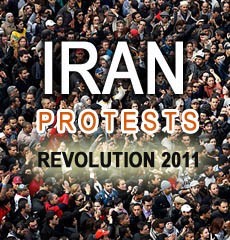 Following the pro-democracy movement in the region with Tunisia Protests and Egypt Protests, some Iranian protesters also hit the streets.

Unlike the other corrupt regimes in the region that are backed by the west and are led by unchanged rulers, Iran is actually in a contradictory position as it has established for itself a tailored democratic system of power transfer and has been for long the sworn enemy of the USA and the west.

The protests and gatherings are therefore very suspicious and are seen as foreign intervention by intelligence.

After minor suspect protests took place in the month of February 2011, the real opposition organized a large scale demonstration to wash its hands from it, asking those responsible for putting the national security at risk to be hanged in public.
The protests resulted in 3 dead, and other casualties. Many were also arrested.

Help us improve this page:   Correct or update the Iran Protests page