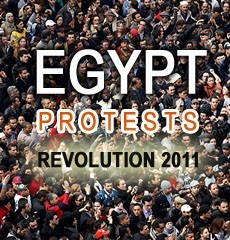 Following the Protests in Tunisia, the Arab region was faced with a new set of protests which first broke out in Cairo Egypt, one of the largest Arab cities.

The 2011 Egyptian Revolution officially began on the 25th of January, and was labeled the January Revolution or Thawret 25 Yanayer. Though signs of unrest had appeared years before, the Tunisia Protests revived the Egyptians' resolution for change.

Participants of the protests wanted to keep it under a peaceful nature. They called for a campaign of civil resistance. The protests were in the form of a series of demonstrations, marches and sit-ins.

Protagonists and Leading Participants in the Egyptian Revolution

Other important entities supported the Egyptian revolution like Kefaya, an Egyptian Movement for Change that was founded by George Ishak. The El Ghad party elite like Ayman Nour were also very visible. The Muslim Brotherhood, although keeping a low profile, was also very active and a crucial element of support for the liberation movement. Fridays were often determinant days, were people would flock in masses right out of the Mosques and hit the streets straight to Tahrir Square. Muhammad Al-Baltaji, Essam al-Arian or even Mohamed Habib were some of the many MB members to express their support for the protests.

A January 25 Youth Coalition was created and held many meetings. Members showed a lot of affinity with personalities such as Issam Sharaf, Ahmed Zuweil, Farouk El Baz, Kamal El Ganzoury and Ahmed Goweily.

Mohamed Elbaradei was another visible figure in the opposition, and many thought he could lead the way during the transitional government phase.


Labor Strikes and acts of civil disobedience were seen at the Demonstrations. Demonstrators of all age groups and social classes later joined the protests, calling on Hosni Moubarak and his regime to step down of power.


The Egyptians were mostly noted for creating the slogan "Al shaab yourid iskat el nizam" (the people want to topple the regime ),which was later adopted by all the following protests in the Arab World!

Egyptians held demonstrations at Al Tahrir Square also known as Sahat Al Tahrir, and established a continuous Sit-in. People were against the corruption of the government, the low minimum wages and the lack of freedom of speech in Egypt. The demands increased and the resolve went exponential after innocent martyrs started dropping on the hands of Mubarak's security forces.


As the demonstrations escalated, the Internet in Egypt was cut off by an order from the Egyptian government. Wael Ghonim, an employee of Google disappeared for few days before he was released by the security forces who had interrogated him.

Although some media activists such as Egyptian TV personality and journalist Hamdi Kandil were in support of the protests, the majority of Egyptian Televisions and radios (controlled by the regime) were portraying the protesters in a condescending untrue way. People tuned in to Al Jazeera TV to learn the truth, despite the interference that jammed the broadcast on many occasions. In a sign of solidarity, many other regional television stations like Al Manar Television, Al Jadeed TV, Orange Television - OTV, etc.. aired on their waves Al Jazeera's broadcasts.

Reporters were also refused admission on the Egyptian territories, making it difficult for the media to cover the protests correctly. Licensed reporters were therefore substituted with eye witnesses and participating individuals. Nawara Negm was actively present in Tahrir Square, along with the rebellious youth standing up against Mubarak''s dictatorship, and proved very valuable in reporting to the media her observations. She witnessed most of the twists, including police brutality and the "Baltagiya" phenomenon (hired x-cons and mercenaries that brutalize civilians) topped with molotov cocktail attacks, all of which attempted to terrorize the protesters and put a stop to the legitimate peaceful manifestations. 'Baltagia' also became a term widely used on all TV stations, and in consequent protests in the rest of the Arab World.

Viewers in the Arab World lived for days in front of their TV sets, and would sleep with their TVs left on as if with the protesters in Tahrir Square. Nawara became a symbol, not just for the Egyptian Revolution but to a whole part of the world that was going through a rebirth phase! Her aspirations, worries, hopes, ... were that of all Arabs. Her eloquent voice interventions on al Jazeera would often be moving and expressive of the changes that were taking place.

On 20th February, Many prisoners were released.

On 21th February, Muslim Brotherhood announced a new political party called the Freedom and Justice Party, which will take part in the upcoming parliamentary elections. The new party was led by Doctor Saad Ketatni.

On 3th March, The Council appointed Essam Sharaf as Prime Minister following Shafik who submitted his resignation to the Supreme Council of the Armed Forces.

On the 5th of March, the State Security Intelligence (Security Police) was Dismantled and a new one was to be restructured.

Egyptian youths boycotted US Secretary of State Hillary Clinton's visit to Cairo Tahrir Square on Wednesday, March 16, 2011.Surrounded by security guards during a 15-minute stroll on her way to visit Egypt's new prime minister, Clinton surveyed the square that has come to epitomize the protests that led to Mubarak's ouster on Feb. 11.


Official numbers suggest around 400 people died as a result of the protests, out of which 232 in Cairo and 33 in the city of Alexandria.

It is believed however, that the actual numbers are much higher. The Egyptian officials did the necessary to change the reason of death of many martyrs.

During these difficult times, the security forces deserted the streets, which became swamped with Baltagia. Despite community created watch groups, Many civilians were still attacked in the streets.

Another strange phenomenon that reflected the level of chaos in the country was the accidents between automobiles and pedestrians. Many amateur videos shot with mobile phones, showed police cars or diplomatic vehicles deliberately running over pedestrians. Such films turned up on the internet and later on aired on most televisions.


- Many celebrities including actresses Najlaa Fathi and Sherihan or writer Nawal El Saadawi were calling for change and encouraging the youth to make it happen. Basma Hassan was one of such VIPs to have taken part in some of the protests.

- During the demonstrations, Tamer Hosni got kicked out of Tahrir Square.

- Egyptian Actor, Adel Emam was one of the few celebrities who stood with the government and showed support to Mubarak Regime.

-The Man Behind Omar Soliman and his mysterious identity provoked a photoshop trend frenzy, with facebook pages dedicated entirely for him.

-People could not help but compare between the revolution in Tunisia and the one in Egypt, highlighting the strange coincidences. Ben Ali fell on the second Friday of January, and Mubarak on the second Friday of February. Another strange coincidence is that their fall came one day after their third speech. Ben Ali said he would not run for elections in 2014 and he fell on the 14th. Mubarak said he would not run for the 2011 elections and fell on the 11th. Another observation was that the date of departure of Mubarak was a special palindrome date: 11 - 02- 20 11.

Help us improve this page:   Correct or update the Egypt Protests page