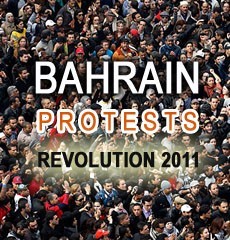 The Bahrain Protests started effectively on the 14th of February 2011. The protests were carried out in the form of huge demonstrations, focalized around Dawar al Lou2lou2a in Manama or the Pearl Roundabout. This was in a way the equivalent of the Tahrir Square in Egypt Protests.


The Bahraini people called out for political freedom and reforms in the country, including the end of corruption, the stop of the mass naturalization of Arabs, and the end of all types of discrimination between citizens. The protests in Bahrain later also aimed at ending the monarchy system in Bahrain. Protesters asked for the monarchy to move to a parliamentary system where cabinet is made up of elected officials, though some wanted a republican system. (Government is appointed by the king and parliament has few powers.)

Leading the way was the Wefaq Party with Ali Salman, the Haq Party with Hassan Mushaima, the Wafa Party with Abdel Wahhab Hussein, and the left-wing secular party Waad with Ibrahim Sharif.

As a result of the initial protests, many political prisoners were released and a few ministers got dismissed from power. Economic concessions were also proposed by King Hamad.


On 17th of February 2011, deadly night raids were carried out against protesters at Pearl Square in Manama. Protesters in Manama camped out for days at that location, which served as the center-point for their protests.

Another protest took place at Ras-Roman mosque, thousands of Bahrainis marched on the immigration office in the capital, Manama. They protested against granting citizenship to Sunnis from other countries to play with the demographic and identity of the native people.

Nabeel Rajab, the leader and spokesman of the Bahrain Center for Human Rights said that the authorities in Bahrain blocked a Facebook group which organized the 14th of February 2011 protests in Bahrain. He also added that the official website of the organization was blocked for several years.

Many activists and bloggers got arrested by securities in Bahrain prior to the 6th of February 2011.

Forces from the Gulf Cooperation Council (GCC) arrived in Bahrain Monday 14th March 2011 to help authorities restore order after violent clashes erupted over the weekend between protesters and security forces. More than 1,000 Saudi troops and 500 police from the United Arab Emirates took up positions around the island, to help the royal family control protests.

The move was read by the people as a clear breach of Bahrain's sovereignty by foreign troops.

Iran condemned the military intervention by the Gulf troops, and the independent Kuwait Society for Human Rights criticized sending Gulf troops to Bahrain, saying the move would encourage "unwanted" regional powers to intervene, a clear reference to Iran.

Bahrain state TV reported on 15 March 2011 that a three-month state of emergency has been declared to try to quell political unrest threatening the monarchy. The GCC troops ( Der3 al Jazeera), the policemen and the hired mercenaries attacked the citizens killing 4 and injuring more than 1134!

On the morning on March 16 the whole camp in Pearl Square was cleared out from the pro-democracy protesters. Military troops and security forces opened a large-scale assault against hundreds of anti-government protesters occupying the landmark, burning their tents and firing at them. Bahraini security forces in light armored personnel carriers began to clear makeshift roadblocks from a thoroughfare surrounding the area. The International Hospital of Bahrain was hit by tear gas because it was accepting injured people. 5 martyrs fell and hundreds more injured because of these clashes.

The officials resorted to placing weapons in the cars of citizens in the Salmaniya area, before filming them for state television. Meanwhile, the mercenaries and Baltagia of the regime terrorized Bahrainis in the streets with State-Organised Murder. Snipers made sure no one circulated. The injured could not seek medical help, as even medical staff members sent to Salmaniya were stopped . Manama's main hospital, SMC, was taken over by troops and prevented anyone from getting to it. The forces raided Salmaniya Hospital, locking it down and disallowing doctors and nurses from leaving.


More than 12 judges from Majlis el shoura stepped down as a sign of protest to the latest escalations in Bahrain.

Hizbollah and other Arab nationalist groups in Lebanon organized a rally in support of Bahrain right in front of the ESCWA.

On March 17th a large scale crackdown was carried out by the forces in all of Bahrain arresting activists and most of the main opposition leaders, and even journalists like Lamees Dhaif, or personalities like Dr. Ali Alekri, among many others. The military imposed a curfew and warned people not to gather in public, shooting at anyone in sight. More than 5 martyrs were recorded.

The officials tried to portray the legitimate protests of the Bahraini people as a sectarian fight, and undermined their plight by inflating Sunnas vs. Shiites tensions. This strategy began years before, but was heavily played up during the latest incidents. Shiites are not allowed to enroll in the Bahraini army, a corrupt institution that is infused to a large extend with naturalized Sunna Arabs. To note that Saudi officials have repeatedly claimed Bahrain is part of the KSA.

U.S. Navy began to evacuate their facilities in Bahrain.

Protests in KSA, Kuwait and other Gulf states erupted in the streets in support of the Bahraini people, demanding the end of the occupation of Bahrain.

Horrific Raids and Arrest Crackdown on Bahraini Activists:
The crackdown of the Bahraini government includes both Shia and Sunni nationals of the country. The ruling system especially targets Sunni Muslims who stand up for the rights of Shia, in a bid to prevent any cooperation between Shia and Sunni. Al Kalif regime is striving to break out sectarian differences, and has hired Saudi forces to achieve the end.
The Prime Minister, Chairman of the King's Bureau and Bahrain government, is reported to murder people by the paramilitary groups and special intelligence services.

Hundreds are being detained in prison facing torture and humiliation for having participated in the peaceful protests. The Bahraini regime is especially killing, detaining, physically and verbally abusing and dismissing women from work and education. Targeted Bahraini come from an array of backgrounds and includes political and social activists, doctors, teachers, housewives, as well as school and university students!
This is thought to be a vengeance against Bahraini women for the key role they played in the protests, forcing them to give up that role and retreat. It is also a way to add pressure on the opposition to stop its legitimate demands for reform. Many were also victims by the direct sniper shooting from the Bahrain’s army.

Female doctors and nurses that treated the wounded and injured at the Salamaniya Medical Complex, were also subject to intimidation and physical attacks. The long list includes Dr. Alaa Al-Safaar,Dr. Haneen Al-Bosta...Among the detainees is Dr. Khulood Al-Durazi, one of the most famous doctors in the Gulf, specialized in infertility and IVF, as well as the President of Bahrain Nursing Society, Mrs. Rula Al-Saffar and the Vice President of Bahrain Teachers' Society, Mrs. Jalila Salman. Dr. Ali al-Ekri, and Dr. Zahra al Sammak were torture to extract from them confessions, which they had to sign while blindfolded.

Even a young Bahraini poet Ayat al-Qarmezi faced imprisonment for reading out a poem criticizing the country’s King. She was arrested in March for reading out a poem at a pro-reform rally in the capital Manama, and was charged with "incitement to hatred of the regime" and was reportedly tortured while in detention. To note that at the night of her arrest, Ayat Qurmuzi's parents were threatened to witness the killing of all their children if they did they not disclose the whereabouts of Ayat. The authorities denied later the arrest of Ayat, after taking her from her home, and asked her family to report her missing, which put them in a very difficult psychological state and anxiety.

In June 2011, Amnesty International made a Worldwide appeal to health professionals on behalf of Bahraini doctors, nurses and paramedics tortured before standing trial for treating wounded protesters.

Help us improve this page:   Correct or update the Bahrain Protests page