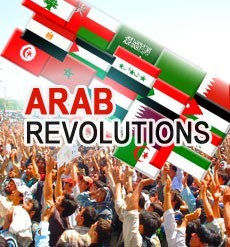 Arab Revolutions: Legitimate struggle for freedom, or conspiracy with a hidden agenda?

For more than half a century, the Arab people were caught up between the terror of their western-sponsored dictators and the rise of bearded burqa-wielding fanatics. This was actually part of a crafty system which had led the West to pillage and oppress the Arab people in its ongoing quest for maximum profit. Occupying their land and counterfeiting their history through the state of Israel was also part of the grand plan to crush Arab dignity and self worth. The biased media was also always ready to portray them in the worst possible ways. Anyone who dared stand in the face of this injustice was mercilessly demonized. Occasionally, Western powers would fail to calmly install a puppet leader at the head of an Arab country, or the man they bet on would decide to no longer play by their rules. This is when the West would directly interfere by waging wars, since its economy partly depends on the military-industrial complex anyway.


The Arab people finally gathered all the necessary courage and determination to take charge of their destiny and put (or try to put) and end to this entire charade.
The Arab Revolutions started with the Tunisia Protests in December of 2010. Success encouraged others to join the movement and soon the Egypt Protests followed in February 2011. The movement spread in the region like an unstoppable virus that engulfed the rest of the Arab World, in what became known as the Arab Spring or Printemps Arabe.

All this was rather unexpected, and came as a surprise. The US, that was hit by a great paradox, attempted to embark on the wave of popular protests in the Middle East. They were obliged to quickly readjust their previous stance, placing themselves in the role of the helpers, and claiming these revolutions are within the framework of US strategy and interests. They were unsuccessful however in gaining the trust of the Arab people, who boycotted the visit by the US diplomatic chief & US Secretary of State Hillary Clinton to the region. They however managed to hijack some of the revolutions, guiding them towards their own interests in the region, with the help of KSA via Qatar.

Unrest quickly reached other parts of the Arab World, with the Libya Protests and the Yemen Protests. Muammar Al Gaddafi was given ample time to suppress demands for reform by using unprecedented force, and therein giving an 'excuse' for the west to directly interfere under legitimate pretexts. Israeli intelligence infiltrated the Libyan opposition, that was in desperate need for help. Al Gaddafi broke all taboos by killing thousands of his own people, placing his country at the verge of a civil war, and most importantly putting a stop the the flow of revolutions in the region!

The Bahrain Protests asking for the preservation of national unity, the end to discrimination and the elimination of financial corruption, thus received less media coverage. The officials tried to portray the legitimate protests of the Bahraini people as a sectarian fight, and undermined their plight by inflating Sunnas vs. Shiites tensions. Riyadh and its allies were also determined to prevent the breeze of political reforms in the Arab world from reaching to other member states of the Persian Gulf Cooperation Council. The Saudi Arabia Protests, Qatar Protests, Kuwait Protests, and UAE Protests remained under control; A definite sign that the plan might have actually worked. President Ali Abdullah Saleh in Yemen who was close to being ousted, also got a second chance, with a prolonged stay.

Losing (or risk losing) existing Arab allies could not pass without a counter revolution attempt. Some opposing powers also witnessed unrest like the Syria Protests. It also reached other regional powers with the Iran Protests.

The counter-revolution also manifested itself by pushing forward personalities such as Mohamed Elbaradei that could absorb the crowds into a more 'moderate' and pro-western change, to ensure western interests.

The Arabs were also very saddened by the bitter-sweet reality of their long lived love affair with Al Jazeera. Although the News TV Station was decisive in the success of the first few revolutions, it gradually became obvious the station had its own hidden agenda. Based on a deal between Qatar and KSA, the station looked away from what was happening in Bahrain or those two other mentioned kingdoms, and attacked one of the last remaining strongholds of the resistance against Israel , Syria, by repeatedly airing fake Youtube videos, manipulating information and giving credibility to fake eye-witnesses. They also seemed to be promoting in a way a NATO occupation of the region. The growing sentiment of mistrust felt by the viewers was reinforced when Ghassan Bin Jiddo resigned from his post at the station.

The above was one point of view regarding these events. For another interpretation about Arab Spring Revolutions, please see below.

Like with most things, some conspiracy theories started circulating around claiming to bring about the real story behind these Arab Revolutions.

Some people believe that the protests in the Middle East and North Africa are the starting point and the building block to what is known as the New World Order. The new-world order is not a new theory, it has been around for many years. People who follow this theory believe the world is moving in the direction of one unique powerful government.

Others, such as Rafik Nasrallah, believe all this unrest is part of neo-cons plan to remove all sorts of official powers and sturdy rules in the region turning it into easy bait with the 'creative chaos' theory.

According to geo-political analyst Albert Mansour, there is no such thing as Arab Spring or Arab Revolutions , rather mere regional 'staff' change by the American Administration, and the creation of week conflicting entities surrounding the state of Israel (occupied Palestine).

Others point to a possible deal between the Muslim Brotherhood and the American Administration, whereby after the first takes over the region and replaces all existing powers (which happen to be cross-sectarian and encompass different religions, despite their flaws), the latter will then break off the deal and take them down once more (through economy, media , or direct wars), leaving the region is one chaotic mess void of any effective resistance. Countries would therein be encouraged to focus on their local problems, and look away from the Arab-Israeli struggle. Sunnis would also be placed in a conflicting opposition with the Shiites of the region.

We are trying to gather the general public opinion on the reasons behind the unrest in the region. Make sure to cast your vote on What is causing the 2011 Protests in the Region?. You can also write down your comments or read what others have to say in regards to the Arab Revolutions.

Help us improve this page:   Correct or update the Arab Revolutions page