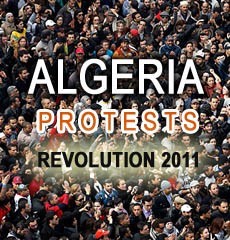 Algeria Protests started in the early year of 2011, following similar protests which took place in the Arab region.

The protests started in December 2010 in the form of self-immolations and major riots and road blockings, which took place in major cities in Algeria.

The protests main outcome was the Lifting of nineteen-year-old state of emergency in Algeria.


As the widely reported protests sparked off by Mohamed Bouazizi's self-immolation in Tunisia began to have a clear impact on the Tunisian government, a wave of self-immolations swept Algeria.


On the 14th of February 2011, Mourad Medelci the Foreign Minister of Algeria announced that the state of emergency which the country was in would be lifted within 2 days.

On the 16th of February 2011, Ahmed Ouyahia, the Prime Minister of Algeria declared that the state of emergency would be lifted by the end of February.

Abdelhamid Mehri, the Former FLN leader called out for a true democracy to take place in Algeria, and that people in power are not capable to deal with Algeria issues.

On the 18th of February 2011, A Facebook group organized some protests in Algeria. As a result security forces and police were positioned in major roads with water cannons to control the demonstrators.

Help us improve this page:   Correct or update the Algeria Protests page