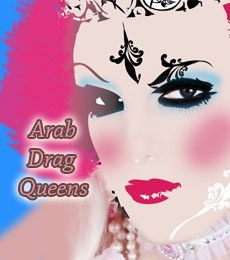 Here is a list of the most famous Arab Drag Queens from the Middle East and the rest of the world.

Some are part-time female impersonators , others have made it their careers. By drag queens we mean men who dress up and act like a caricature woman for the purpose of entertaining.

We will gradually try to complete this research, adding the missing names (suggest them to us in a comment below) as well as trying to determine the pioneers in this art from. We are still investigating to find out when this type of entertainment first emerged in the Arab World...

The most famous Drag queen in the Arab World is without a doubt Bassem Feghali. Bassem comes from Lebanon, and has been responsible for making this art form popular across the Arab World. He has taken it out of the underground gay niche oriented clubs to the wider mainstream public.

But the list of Arab Men known to dress up like Women is endless, and dates back to black and white Egyptian movies.

The first time an Arab man wore women clothes in film is thought to be Ali al-Kassar in 1920. The short silent film of thirty-two minutes was called 'American Aunt' and directed by an Italian who lived in Egypt named Boenfella. The movie also starred Amin Sodki, Alfred Haddad, and actress Claude Ricano. It was based on the English play 'Charley's Aunt'. Kassar impersonates a woman (an aunt from abroad) to help out his friend.

(The story of the film was used again more recently in the movie «Succar Hanem» starring Abdel Moneim Ibrahim.)


Ismail Yassin is probably the most famous Egyptian actor known for his gender bending roles, and repeated many times the experience of impersonating women for the sake of comedy in movies. In the film «Last Lie» of 1950, Yassin played the role of an old lady next to Farid al-Atrash. He also played a woman in the film "Anissa Hanafi" in which a man turns into a girl after surgery and as a result of female hormones... The movie is considered quite unusual, dealing with such a controversial transformation in a black comedy. The author of the film was Jalil Bendary and the director Fatin Abdel Wahab submitting their film «Ms. Hanafi» as the first and last attempt conscious and mature so far are for

Help us improve this page:   Correct or update the Arab Drag Queens from the Middle East page