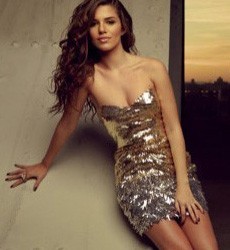 Lara Skandar Mission Is You Interview

The following is an interview with pop singer Lara Scandar, the starlet behind the massive hit single Mission Is You.

We have been closely monitoring the music scene in the Middle East for a while now, and solid English tracks within international standards come along only so very rarely. Shakira and Mika don’t really count, we are talking about locally produced artists ;) So you can imagine how excited we were when we first came across Mission Is You!

We finally got the opportunity to ask Lara about this great song, her possible international career, in addition to her experience and music influences.

Hello Lara, and thank you for doing this interview.

Thank YOU for interviewing me. You've got a great thing going on in your website. An amazing and rare efficiency... Tons of respect!

Well thank you for the support, we are trying our best :) Let us start by telling you that you have one of the most active fan clubs we have seen in years! We can easily say you are also one of the few ex-Star Academy students who have seen their fan base actually increase after the show! How do you comment?

I know I constantly say this but I'm still SO shocked and appreciative about all the love and support I constantly receive from fans, new and old. I've watched firsthand how much my fan base has grown and it's what pushes me to want to do more. It gives me more of a reason to work and come up with something new. I love it and I'll be forever grateful.

Other than the exposure of course, what did the Star Academy experience give you? Maybe on a personal level for instance. Would you encourage other young talents reading this to take part in the next season (if there is going to be one that is)?

Star Academy has taught me a lot and anyone who knew me before will easily be able to realize that. I've grown so much on a personal level. Living with 19 other candidates of different ages, nationalities, cultures, etc. will teach one more than they expect to learn. I've been fortunate enough to travel to different places and meet new people throughout my life but what I experienced during my stay at the academy is far more than I could have learnt on any trip. I've grown so much as a person. I've started to see things differently and the exposure has led me to discover a confidence in myself I never knew existed. I encourage anyone and everyone to follow their dreams, be it Star Academy or not. However, my advice to anyone who'd like to join the show: Remember where you came from. Stay true to yourself and don't let the hype of it all get the best of you.

Good advice! Anyway we were very impressed, like most people really, with your debut hit single Mission Is You! It was a really strong start for you. Did you expect this much success when you first recorded the song? Tell us a bit how it came to be.

From the moment I heard the song I fell in love. I honestly wasn't really sure what to expect at first because singing a foreign language on a show is one thing but actually taking that path in the Middle East is a completely different and riskier step. I'm just grateful it all turned out well.

Were you aware of the existence of another version of the song, when you first released yours?

Actually, not at all. The weird thing is I had to find out on my own. I had found out even after shooting the music video which made it even more complicated because everything was already set. Thankfully, everything was legal so I had nothing to worry about plus both versions are a reflection of the artist and I like them both.

What about the music video, which was also very beautifully done. What did it feel like when you learned you were going to shoot with Ray Kay? What was the experience like?

Ray Kay is brilliant! I've always been a fan of his work but never dreamed of working with him until I got the chance to. I knew I couldn't go in any other direction. It was an amazing experience. Not only was it fun but extremely educational for a new artist. I love Ray's work and we'll hopefully be working together on another video soon.

We really feel you have what it takes for an international music career. Is that part of the plan, or are you more interested in the Arabic audience?

I honestly hope you're right =) I'd obviously like to aim further in the future but it was my decision to start in the Middle East. This is my home and this is where people first got to know me.

We strongly believe in you and we know it’s just a matter of time before you get noticed on the international scene...especially if you release more hits like Mission Is You ;) We heard you are now also working on your debut Album. Can we know more about that…will it include Arabic tracks…have you picked a name for it yet etc.?

My album's actually on hold now because I've been getting in to so many different projects these days.

Like working on a duet with Tamer Hosny, is that true?

Tamer's an amazing artist whom I respect and have always been a fan of. If the rumors are true then I'd be lucky to work with him ;)

Haha, loving your answers! Anyway, were you really inspired by Christina Aguilera to become a singer? Is she like your role model in a way? Honestly we don’t like all of her work hehe, but one of her latest tracks You Lost Me was a positive surprise actually. Amazing song. Did you hear it? Do you see yourself next to her in a duet?

Yes. Christina has always been my favorite singer. I still remember the first day my father bought me her CD. I was so amazed by the fact that she had an entire album out with such a beautiful and strong voice at the age of 16. I never said she was my role model but as an artist, I truly admire her talent. You Lost Me is one of my new favorites. I work on it at home for the fun of it. Who wouldn't want to collaborate with their favorite singer? I'd love it.

You are part Lebanese, part Italian, part Egyptian. You sing in Arabic and in foreign languages etc. Surely some people will go mmmm that's a bit like Dalida. Have you been to Paris;) ?

I love Dalida. If we're going to be honest, I've got a slight obsession with her. Haha. I've got all her DVDs, songs and even know her biography from A-Z. As much as I love and admire her, our similarities end with the common languages we sing in. Dalida's admired in both the Arab world and abroad, so if they link me to her in any way, it's an honor. I'd love to cover one of her songs. I love Paris. It's my second home.

Well we are yet to meet someone who wasn’t obsessed with her, at least at one point in their life, so you are fine :) We must have also watched the miniseries DALIDA produced by her brother Orlando like a billion times over and over again! What other artists currently on the scene do you like? (Arabs /or International).

You're going to regret asking me that question because my list is never going to have an end. I've been listening to Nicki Minaj a lot these days. I'm in love with her song Right Thru Me. Obviously, there's Christina. I adore Michael Buble, Ella Fitzgerald, Louis Armstrong, Katy Perry, Taylor Swift, Tony Bennett and the list goes on. As for Arab artists, Nancy Ajram and Sherine are always at the top of my list.

That’s one eclectic mix :) Ok thank you again Lara for doing this interview. We are looking forward to your next releases, which we are convinced will be just as good if not better than your first one. Would you like to add anything else before we end our little chat?

I just want to thank you, Fanoos for your support and professionalism. A HUGE thanks to my fans as well. I love you guys.
Help us improve this page:   Correct or update the Lara Skandar Mission Is You Interview page