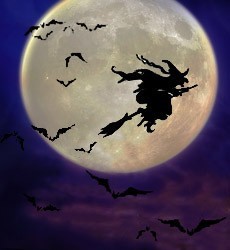 Best movies about witches or witchcraft:
Here are the top 10 best movies about Witches or Witchcraft. From black comedies, to spooky thrillers, passing through crazy Halloween flicks, Hollywood has always been fascinated with witches and has produced thousands of movies about the occult craft.

You might be more familiar with Harry Potter, the Blair Witch Project, or Wizard of Oz (the Return To Oz is scarier and much better if you ask us), but don't miss out on the many other great movies that feature black magic, sorcery, or the occasional ridiculously funny wicked witches! Not all witch movies have to be gruesome and scary; we included in our list a few fun light comedies and covered the different genres for a perfectly balanced list.

1-The Craft (1996)
The Craft is by far our all time favorite movie involving witchcraft and witches! Four outcast teenage witches cast black spells on their taunting classmates who have nicknamed them 'The Bitches of Eastwick'(refer to movie number 3 below). Sarah Bailey (Robin Tunney) is the new kid at school. She joins a mini convent of three other female misfits (Fairuza Balk, Neve Campbell, and Rachel True) who are trying to learn witchcraft and amplify their magical powers. They soon turn against one another, and a battle of the witches becomes imminent. Fairuza Balk (yes her name sounds Arabic because her mother is the belly dancer Farideh, and her father has gypsy ancestry and grew up in Turkey) plays one of the most wicked modern day witches to ever appear on screen. What happens next? You will have to watch the movie…Fairuza also actually played Dorothy Gale in Walt Disney's Return to Oz!

2-Supergirl (1984)
Probably the most underrated and unappreciated movie that involves a witch, in history! This movie could have been placed lower on our list, but given it has been completely neglected by other top 10 lists out there, we had to give it the attention it deserved. This true camp classic was actually a huge box office flop when it first got released lol! The film follows Kara (Superman's cousin played by Helen Slater) as she leaves her home in Krypton and heads to Earth where she is to retrieve the 'Omegahedron', a life-force globe vital to her people's survival. It had fallen into the hands of a villain witch. Don’t be fooled by the title, the real heroine in this movie is the sexy redhead witch called Selena, an aspiring black magician played by Faye Dunaway. This movie is said to be the most bizarre comic book adaptation ever, and that's exactly why we like it. That and the fact that all of the strong characters in it are women ;) Watch as Selena evoke the darkest demoniac forces ever seen on the silver screen. You won’t be disappointed! The 80s are making a strong comeback lately, so it is only fair to have such a movie up here.

3-The Witches of Eastwick (1987)
Three bored women (Cher, Susan Sarandon, and Michelle Pfeiffer) in a picturesque New England town, unintentionally summon a wolf-like womanizer devil (Jack Nicholson) after genuinely yearning for Mr. Right to appear in their lives. When they realize that their hidden magical powers were behind the demise of their own little town, they attempt to rid themselves of the creature they had conjured by mistake. This movie is funny, sexy, dark and sassy all at once, you should not miss it. The Highlight of this movie comes towards the end, when the 3 witches cast a Voodoo doll spell (or Hoodoo, whatever...)!

4- Death Becomes Her (1992)
In this hilarious cynical black comedy, Isabella Rossellini plays Lisle von Rhoman, the sexiest witch ever both on and off camera! She could have retired after starring in this movie, nothing she did after it left any trace anyway. Her few appearances (and crazy outfits, or lack of shall we say) gave this great movie, that little extra touch of insanity (not that it needed it lol). The film centers on the eternal quest for beauty and youth. The exotic woman heads a sect for VIPs who can afford her elixir of youth. Broadway star Madeline Ashton (Meryl Streep) steels her longtime rival and aspiring writer Helen Sharp's (Goldie Hawn) fiance, a plastic surgeon called Ernest Menville (Bruce Willis). Consumed by hatred for Madeleine, Helen becomes an obese recluse and ends up in a mental institution where no one hears of her again...until years later, when the now bitter and old couple is invited to the signing of her bestselling book. Expecting to see a fat old hag, Madeline is shocked to find a recovered Helen looking stunning in a sexy red dress, and ready for revenge! Turned down by her plastic surgeon that refuses to operate further on her, Madeline is forced to seek the help of this mysterious witch who offers her the magic potion for a magical solution: An elixir that not only smoothes away wrinkles but actually guarantees immortality; 'A touch of magic in a world obsessed with science... Siempre Viva: Live Forever!' Madeline is now ready to confront her rival again who, in the meantime, has been secretly plotting with her husband on a way to get rid of her for good. We don't want to ruin the surprise, so watch the movie for the rest! Buy it while you are at it, because you will want to watch it over and over again, we promise! This oddball is a modern version of the 'who is the fairest of them all' concept.

5-Stardust (2007)
The best movies with witches often seem to have them in three for some reason, and Stardust is no exception. Tristan (Charlie Cox) is on a quest to retrieve a fallen star Yvaine (Claire Danes) from the sky and win the heart of Victoria (Sienna Miller). Simultaneously, a dying king has sent out his sons to also retrieve it, if they wish to be crowned next. More competition is on the way, when a coven of witch sisters (lead witch played by Michelle Pfeiffer) also seek it out as a means to restore their vitality and magic. This movie is packed with some of the most inventive magical tricks and special effects. You will also see a type of divination practice rarely observed in Hollywood big budget commercial movies, the use of freshly slaughtered animals.

6-The Skeleton Key (2005)
This supernatural thriller is set in a spooky atmosphere of a dilapidated Louisiana bayou mansion. Caroline Ellis (Kate Hudson), a newly employed hospice at the backwater plantation home of Violet (Gena Rowlands) and her invalid husband Ben (John Hurt), gradually becomes mixed up in the hoodoo history of the house and its inhabitants, as strange things begin to happen. Caroline is very skeptical at first, but soon realizes the key to escaping from this jigsaw-puzzle may lie in a creepy attic; if she dares to believe in what she discovers, everything she fears will become real! You will get to witness some great hoodoo and high magic spell casting, in addition to a few frights here and there, all building up to the final unexpected ending! We were positively surprised by this great movie, but much more with the performance of an actress we usually look to as bland. Maybe it's because we cannot help but compare her to Goldie Hawn (her mother), and she still has a long way to go. Maybe in the future, we will change our minds ;)

7-Snow White
There are many versions of this ancient Grimm Brother's story, but two seem to stand out the most for us.

Snow White - A Tale of Terror (1997): The best version to date, this movie is much closer in tone and mood to the original somber tale. And the cherry on the cake is of course Sigourney Weaver who beautifully plays the wicked queen! This very dark visual masterpiece is the scariest Snow White you will ever get to see. Did we mention Sigourney Weaver is in it lol??!

Snow White (1987): This is another version worth watching. It was actually shot in Palestine! Diana Rigg superbly plays the Evil Queen in this Cannon Movie Tale. She almost makes you wish Snow white would drop dead already. The mirror is very original in this version, and was actually ripped-off by Bassem Feghali in his TV series 'Alf Wayle Bi Layle', which aired on LBC!

8- Seventh Voyage of Sinbad (1958)
This movie is considered a landmark film in the fantasy genre, and a masterpiece in cinematic special effects of the 50s. It has the best Dynamation creations (stop-motion animation) ever done by Ray Harryhausen. What concerns us here is the evil magician Sokurah (Torin Thatcher) who is dedicated to the forces of evil and darkness. He shrinks Princess Parisa (Kathryn Grant) to roughly the size of a thumb, and Sinbad is to look for the only cure that would restore her.

9-The Witches (1990):
Anjelica Huston has fun playing the Grand High Witch, a villainess that heads a secret witches’ coven. A young boy named Luke (Jasen Fisher) happens to be at the posh hotel in England, where they are holding their annual convention. The Grand High Witch decrees that all children in England are to be turned into mice, and Luke and his friend Bruno (Charles Potter) are the first victims on the list! Luke's grandmother (Mai Zetterling) has long been fighting the witches and teams up with him to fight the evil witches by stealth. This was a childhood favorite, which we believe has stood the test of time.

10-The Beastmaster (1982):
Not really a movie about witches per say, but this cult flick is packed with high magic symbolism and dark sorcery. Plus, it features one of the most beautiful women we have ever seen on screen, the sexy Tanya Roberts. She plays Kiri, a slave girl and cousin of the son of a king imprisoned by the evil Maax. The Beastmaster tells the story of Dar (Marc Singer), the son of a king who was stolen from his mother's womb by a witch under the command of vicious sorcerer Maax (Rip Torn). A poor villager saves Dar from being sacrificed and raises him as his own son, teaching Dar how to fight. Dar actually has the ability to telepathically communicate with animals (an eagle, a panther and two adorable ferrets named Kodo and Podo). His village is attacked by the evil Jun horde, a race of beast-like warriors controlled by Maax. Dar and his clan team up against Maax in this very original fantasy film. The movie was labeled as Conan the Barbarian ripoff when it first came out, along with a modest success at the box office. However, it was far more original than it was given credit for. It also seems to have been under the influence of BDSM fashion and accessories lol! It is a real treat to watch, you will surely like it.

The Arabic dubbed Mexican tele-novela Marielena, actually had a few interesting Satan-worshiper characters and black occult scenes of sacrifice :) That’s the place you would the least expect to find such a thing lol!

Help us improve this page:   Correct or update the Best Movies About Witches page