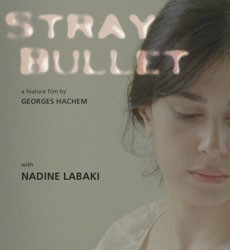 Stray Bullet is a Lebanese film directed by Georges Hachem.

Stray Bullet becomes RSASSA TAYCHEH in Arabic, and Balle Perdue in its French version. It's a socio-politically charged family melodrama set in 1976 at the beginning of Lebanon’s civil war.

Nadine Labaki (director and star of 2007’s hugely successful Arab film Caramel) plays Noha, about to enter into an arranged marriage with a man she doesn’t love. While her overbearing family make the wedding preparations, Noha sneaks off to the woods with her lover, where she witnesses a brutal act that changes her perception of the world forever...

Help us improve this page:   Correct or update the Stray Bullet Movie page