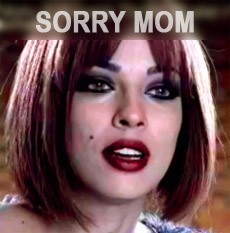 Sorry Mom is the name of a 2011 Lebanese Thriller Movie which stars Lebanese beauty queen Nadine Njeim. The actors of this movie include Aziz Abdo, Nancy Afiouni, Samer El Gharib and Elie Khayat.

The story of the movie is written by Yuri Mrakadi, Emad al Rifai and Loubna Mashlah. The film is directed by Lebanese director Emad El Rifai.

Nadine plays the role of a woman whose husband was killed and her son was kidnapped. As a result, the woman goes through sever trauma. After 4 years of suffering and her son still missing, she decides to take revenge in her own hands.

Sorry Mom is the first movie of a series of thrillers that are expected to be released in the near future.

Sorry Mom (part 1) will be released in theaters around Lebanon and the Middle East on the 9th of June 2011.

The Music of Sorry Mom movie was composed by artist Yuri Murakadi.

The Executive producer of Sorry Mom movie is Bassem Christo. The movie is produced by Periba productions , Yuri M. Productions and Hannouch holding.

Sorry Mom got very bad reviews. At the cinema, people were laughing not crying, and many left in the middle of the movie....

Other critiques mentioned the bad lighting that was not justified at any moment of the film, and the effect applied to it trying to reach Hollywood standards gave it a really bad fake feel, more like andrew kraimer's "300 night" preset…. The slow motion sequences done in post not shot in slow motion also did not please many. But the worst thing was apparently the sound. There was no sound design whatsoever and the sound was technically bad! Some reviewers gave the example of how while the character moved from the parking lot, then into the car, her voice remains the same.....

Some also stressed on the bad acting, especially Nancy and Aziz.

The movie is now being called The Worst Lebanese Movie Ever!