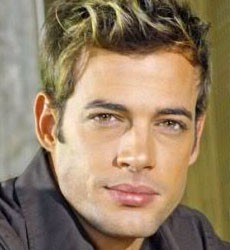 William Levy (Juan Miguel) has been called the Latin-American Brad Pitt of Mexico, and was the hot male model in Jennifer Lopez' I'm Into You music video. He was also People Magazine-Espanol in 2006 Los 20 Solteros Más Sexys in 2006 and one of Los 50 Más Bellos in 2008.

William has starred in many Latin soap-operas including the Trifunfo del Amor, with his character featured multiple times on E!'s clip show The Soup.

Levy also appeared on The Real Housewives of Miami, as the Venue Magazine cover model who got flirty with Alexia Echevarria.

In 2006, William had a son with his girlfriend Mexican-American actress Elizabeth Gutierrez, Christopher Alexandra, and 6th March,2010 they had a daughter Kailey Alexandra.

Help us improve this page:   Correct or update the William Levy page