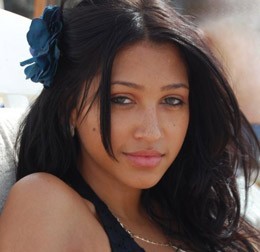 Terri Leigh Jacobs is a South African model and the face of Nivea Middle East for 2010.

Terri Leigh Jacobs is the winner of NIVEA Angelstar model competition 2010 for the Middle East: Nivea had launched a model search for their new brand Angel Star in the Middle East. They did an online competition, and thousands of girls from all over the Arab World uploaded their pictures in the hopes of getting chosen. Terri Leigh Jacobs was one of the 5 finalists NIVEA had picked out.

Their choice of Terri remains quite perplexing, given that although she lives in the United Arab Emirates she is originally South African. She does however have Middle Eastern features, and is quite pretty nevertheless.

No one can argue that Terri is quite beautiful in all aspects, however the irony remains that Nivea would have us believe they couldn't find one single Arab model to fit their criteria ESPECIALLY since this whole marketing scheme was meant to increase sales in the Arab world?

Help us improve this page:   Correct or update the Terri Leigh Jacobs page