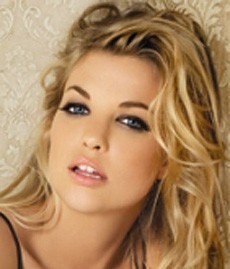 Lyndall Jarvis is a well-known South African model and TV presenter. Since November 2009, Lyndall became popular as a presenter of the SABC3 magazine show Top Billing.

She was labeled by FHM magazine as the Sexiest Woman in the World for 2009. In August 2009, She appeared on the cover FHM. Her first appearance in FHM magazine was for the May beauty of the FHM 2008 Calendar.

As a model, Lyndall Jarvis took part in international commercials, videoclips and ads.

In 2008, Lyndall Jarvis character was the model face for the Laughing Octopus in the famous Metal Gear Solid 4 Video Game.

In Nov 2009, She started presenting the show Top Billing, following the x-presenters of the program; Jeannie D, Janez Vermeiren and Nico Panagio who all moved to work on other programs in the TV station.

Help us improve this page:   Correct or update the Lyndall Jarvis page