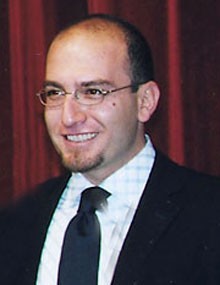 
In 1988, Zaven completed his high school education at Armenian Evangelical College. He entered the Lebanese American University as a Business Administration student and then transfersed to Communication Arts.

In 1992, Zaven joined Tele Liban - TL as a reporter and late-night news anchor. Later he became TeleLiban news correspondent at Presidential Palace in Baabda. Although most viewers suspected it already, Zaven later confessed in an interview that he got the job thanks to connections and networking...

In 1998, Zaven was banned from Tele Liban after he supposedly did a show on poverty and unemployment. Either that, or the deal was off and it was time for him to leave.

Zaven later moved to Future Television, where he remains to this date. Before it shifted to a much smaller niche, the channel was initially going for a broader audience and saw in Zaven (Lebanese-Armenian) a good addition to its diverse staff members.

Sire Wenfatahit was his Televised Show on Future Television.


Zaven deals in his Shows with serious matters like globalization, as well as simple topics like how to cook a chicken. To grab the attention of the viewers around the Arab World, Zaven often seeks to shock with daring topics that were till recently Taboo; sex, adultery, addiction, homosexuality and more...

Zavan then created a new Reality Show entitled Me Now (ANA AL AN). It talked about people's experiences, with no directors, no camera men, no scripts. The special series aimed at giving the chance to the Arab youth to express their thoughts and feelings on TV, using their personal camera as their Diary. Me Noww was a series within his program...

Although many people love Zaven, others criticize him for being too sluggish, dull or simply just another annoying person on TV. He surely lacks the skills to deal with certain conflicts that take place on air, and it has happened before that some of his guests simply walk out in the middle of the show after they feel insulted or manipulated by him.

Help us improve this page:   Correct or update the Zaven Kouyoumdjian page