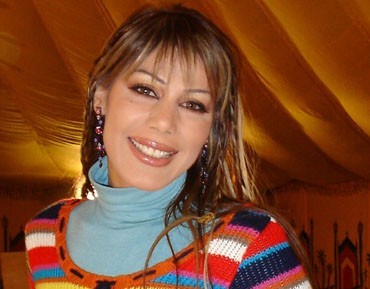 
Youmna, your father was a senior journalist, did he help you start a career in the media field?
Many people may think that my father helped me get into the media world, but although I feel very proud and lucky to be his daughter, he was actually very much against my media career. I studied French Literature at university for his sake, and secretly double majored in Journalism and Mass Communications. He only found out about my secret major when I was in my third year! He tried his best to keep me away from this field and the fact that no body knows is that he forced me to quit several times when I first started.

Why was he against this career so much?
He knew the troubles that were awaiting me. The media field is like an octopus that grasps all your time, thoughts and priorities and you never want it to let go. He did not want me to go into this tough domain with all its hardships. And do not think that he has gotten used to the idea of my work now, until today he longs for the day that I quit.

You hosted the majority of Arab celebrities on your shows and some International ones too. Which episodes of your show are you most proud of?
Every episode has a special flavor and I am very happy with all my guests, but I am especially proud of the program's special birthday episode which, according to statistics, was watched by 80% of Arab viewers who had their TV's on at the time. The great Sabah was my guest that night and despite her illness, she came all the way from Egypt to share this special occasion with me. She is the only one, throughout my media career, who made me cry on air. I was very touched by her love of life and optimism. I will also never forget Zekra's appearance on my show. She was invited by many programs in Lebanon but she chose mine and when anyone would ask her (why Youmna's program?) she would say because I love this girl. We sang together on the show and we became good friends. The last sms I got from her was in Eid El Fitr, almost a week before her murder, this sms means a lot to me and I can never delete it from my phone.

If you know that your guest is lying about a question you ask him, do you let him or her get away with it?
In my personal life, if I find out that someone has lied to me then he or she has lost me for good. But when it comes to my work with celebrities it is a little different. It has happened before, that one of my guests asked me not to mention on the program that he is married and has kids, so that his fans do not get turned off. So I let him off the hook about his personal life, while pitying him and his fans. But if my guest lies about a question and I know that he is lying I ca not say stop right there you are lying! But I do not let it pass easily. I keep on beating around the bush until the viewer realizes that I am not really convinced with the answer, and that for me is enough.

There are countless TV presenters all over the Arab world but most of them do not become all that famous while few of them become big stars. In your opinion, what makes a presenter break the general rule and become a star?
I always ask myself this very same question. I think that it is primarily a gift from God. He gives some people a special charisma that cannot be acquired through certificates, PhDs or even through experience. So you will find that some presenters remain unnoticed while others leave their mark. And this also applies to people we meet in every day life. Some people just shine out even at an outing or over dinner. Besides charisma, a star presenter is hardworking. Believe me, until this day, I still shiver before I face an audience and all words and thoughts disappear into thin air. With time I have come to appreciate this fear, it is in fact a sense of responsibility that pushes one to work harder and eventually become a star. I recall last year at Jordan Jarache festival, I was backstage with George Wassouf, a superstar who has tasted all kinds of fame and love from people and has faced audiences in most of the world's countries. I looked at him and found him shivering and he was freezing cold. After 30 years of stardom and success, this man still fears facing his audience while other singers go up stage without even rehearsing or caring. This, for me, is the difference between a regular celebrity and a real star.

As a journalist, you try to dwell into celebrities personal lives order to make your interview interesting. But as a celebrity yourself, when you are being interviewed do you cooperate and answer questions about your own personal life?
Most famous people avoid discussing their personal lives because when you are under the spotlight your normal actions and activities can be misinterpreted and over-analyzed. I admit that there are situations where I insist on not discussing my private life. As a presenter, I try hard to be as smart as I can to get myself a scoop and an interesting episode for my viewers. So just like my guests, who try to escape from my personal questions, I do the same when I am in the interviewee's seat, but my interviewer has all the freedom to be smart and to try to get some daring answers out of me. Once, I was interviewed by Tony Khalifa on the radio and he managed to make me say things about myself that I had never dreamt of saying in public, and he even made me take out my wallet and tell listeners everything that was inside!

You are one of the few TV presenters who has a trail of faithful fans all over the Arab world. What are your most cherished memories with your fans?
I have countless memories with fans which mean the world to me. But the one fan whom I will never forget was a 5 year-old girl who would come with her mother to see me every day while I was presenting my program from Kuwait. She would come and kiss me and sit on my lap every day and one day her mother told me that the girl loves me and always watches my program and asks her mother to style her hair for her like mine, so while I was on stage I asked this little girl to come up and we sang the program's song together. But when I asked her for her name and age but she wouldn't reply! Later on her mother told me that while she is Kuwaiti her little girl is Iranian and doesn't know any Arabic words except Youmna and the words of the program's songs! The mother also gave me a beautiful Iranian rug, which I still have.

Which other TV presenters do you admire and always follow their programs?
I absolutely adore Jay Leno, he's the president of chat shows in the world and I am the first girl to ever conduct a chat show in the Middle East. I dream of hosting him on my show one day. I also watch Oprah Winfrey and I really admire her. Ever since I saw her magazine in Canada, I've been jealous and hoping for the day when I publish my own magazine. In the Arab media scene I admire Hala Sarhan's intellectuality, her love for her work and her pleasant character. She recently invited me to appear on her show, but unfortunately I was ill and couldn't make it, but I met her at a wedding in Egypt a couple of months ago and we agreed on a new date. I also admire Emad El Deen Adeeb's calm and wise character and Amr Adeeb's humor. I miss George Kerdahy's shows and Zahy Wahby for me is a role model of hard work and persistence. Michel Azzi, and despite my misunderstanding with him, which the press blew out of proportion, I find him to be the number one in game shows in the Arab world. I also watch Heba Mandour's program, I noticed this girl from her very first days, she is hardworking and is very much herself in front of the camera. I also like Mahmoud Saad's mischievous programs.

You and Razan Moghrabi started your media careers in Future TV together. What is your relationship with her today?
Many people don't know that Razan was not just my colleague at Future TV, we were also best friends. We were the youngest and most enthusiastic girls at the station, we were still at college so we would finish our classes and run to the television building. I recall an incident when we were both punished by being forbidden from appearing on TV for a week because of our over-confident behavior, it was a very important lesson. Today, we don't see each other anymore except by chance, each of us has her life, but I prefer to remember Razan the way she was when we first started.

Enough about the media world now, what does the typical guy who grabs your attention look like?
In the blond category, I like the David Beckham type, even if Victoria is not very happy about this. When it comes to dark guys, I really like the way Keanu Reeves looks. But if Ahmed Ezz asks me to marry him I won't mind.

What did you learn from your past romantic experiences?
Like any girl, I had romantic experiences that unfortunately didn't last, and when I think back on them a smile creeps to my face. I have other experiences that are terrible and I prefer not to think about them. But in both cases I have learnt a lot about myself and about life. I learnt that the right person is the man whom I can be proud of in front of myself, in front of others and in front of my children later on. I also learnt only to give my heart to the man who truly deserves it and to never allow any man to use or hurt me.

How important is money for you when you come to choose your future husband?
Like all girls, I dream of being the Cinderella who gets swept of her feet by prince charming. And the only one who made my dream come true was Spanish TV presenter Laeticia Ortez who recently married Crown Prince Phillipe of Spain, and I must admit I'm pretty jealous of her. But the idea of viewing a man as a bundle of money makes me laugh and I truly believe that money is not synonymous with happiness. A man who shows off his financial power to get my attention is not very much of a man.

Everyone has a weak point. What is yours?
My weak point is my family and most especially the children in my family. My sister's children, Hamoudy and Jana have a very special place in my heart.

Help us improve this page:   Correct or update the Interview with Youmna Sherri page