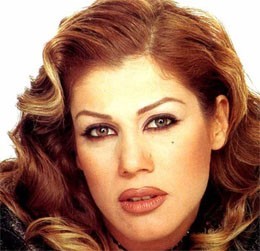 Youmna Sheri was born in Lebanon, her father was a senior journalist. Youmna studied French literature and doubled majored in Journalism and Mass Communication.

Youmna joined Future Television along with other presenters like Razan Moghrabi and Michel Azzi. Youmna quickly proved that she is a very good TV presenter. She soon started interviewing a majority of Arab Celebrities, such as Sabaah and Zekra.

Youmna Sherri admires the work of International TV Presenters Jay Leno and Opera. Hala Sarhan and George Kardahi are her favourite TV presenters from the arab media. Youmna thinks that Michel Azzi is the number one TV Game presenter in the arab world. Youmna was a close friend of Razan Moghrabi, they both started at Future TV when they were still at university. But time changed and both stars now have their separate lifes and different careers in Media.

During the year 2005 Youmna faced some problems with Future TV and soon left the station. Youmna was off the air for several months, until she finally got back on air but this time on the National Broadcasting Network - NBN also known as City TV where she is presenting her own Entertainment Show entitled Layali Al Madina during the month of Ramadan 2006.

Youmna is attached to her family and she considers them to be the most important part of her life.

Help us improve this page:   Correct or update the Youmna Sherri page