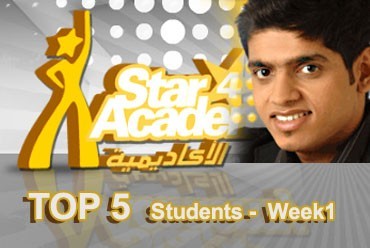 The Top 5 Students of the first week were announced today by the teachers and roula saad as follows:

This season, Roula Saad and the maker of Star Academy Lebanon decided to introduce money awards in order to encourage the students to perform well during the weeks.

The above money amounts will only go to the candidate with the highest money amount count through a duration of 4 months.

Ayoub Al Zadjali who got the first ranking, won a ticket to Austria to visit his collegues from school.

Help us improve this page:   Correct or update the Top 5 Students of Star Academy 4 for Week 1 page