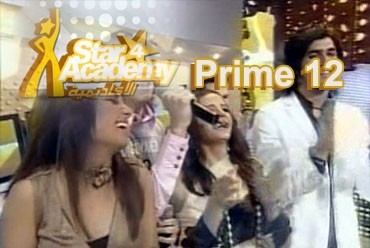 The Twelfth prime of Star Academy 4

The Twelfth prime of Star Academy 4 took place on Friday 2nd of March 2007.

Shada Hassoun got a great surprise on her birthday which was the appearance of her dad on stage; she ran and hugged him as he sang Happy Birthday for her.

No Friend of the week was selected on this prime, however the boys were promised by Roula Saad to spend the week end in Jordan's Sunny City, Aqaba. In addition to visiting Petra.

By the end of the Prime the audience saved Ali Al Saad from Saudi Arabia. While the students selected Sally to stay with them, hence, Amal Lembary left the Academy on its 12th prime.

Help us improve this page:   Correct or update the The Twelfth prime of Star Academy 4 page