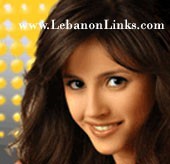 Tina Yamout also known as Tina Yammut is a Star Academy 4 Candidate from Lebanon. Tina Yamout was born in 1987.

Tina Yamout studies Business at the American University of Beirut.

Tina lost her father in the year 2005, she lives with her mother which she loves and cares for a lot.

Tina loves a guy who lives in Canada; they meet up every summer in Lebanon.

Tina is very patriotic, she loves her country Lebanon and is not willing to leave it ever.

Tina plays the harmonica; she dances, sings and even composes her own songs.

Help us improve this page:   Correct or update the Tina Yamout page