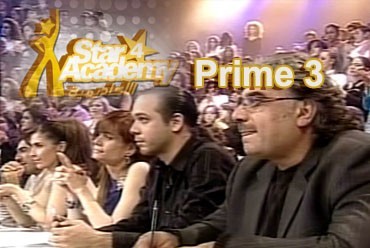 The Third Prime of Star Academy 4

The third prime of Star Academy 4 took place on the last day of the year 2006.

The guests of Prime 3, were Assala Nasri from Syria and Jad Nakhleh from Lebanon.

The Broadway and the Parisian tableaus were fabulous, with the Eiffel tower lighting the stage in glamour.

Shorouq Ahmad from Bahrain and dad appearance on stage was very touching.

Assala changed her clothes three times during the prime, all her outfits were nice and glamorous.

It is worth noting that Mohamed Kammah is very talented student, during prime 3, he performed two of the songs which he composed.

Khaled Fardan who left on Prime 2, was there on stage playing the guitar, he was the guest student of honour.

It is rumored that Khaled Fardan might be return to the academy, something which has never happened before in the history of the academy, but why? and how? and when? lets wait and see what the academy decides.

By the end of the prime, The audience votes saved Maysoun for the second time.

The Students of the academy had to decide the fate of Intisar & Nelly. With more votes goint to nelly, she was saved.

Intisar left the academy with a difference of only one vote.

Help us improve this page:   Correct or update the The Third Prime of Star Academy 4 page