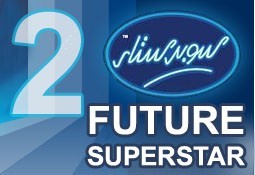 During the second season of SuperStar, three new audition countries were announced Tunisia, Bahrain and France.
Algeria on the other hand was dropped. Female Judge Tonia Moreb quit the show after receiving bad comments about her judging skills during season one. Tonia was replaced with music teacher Fadia Tonb.

For the second season of SuperStar 83 contestants advanced to the semi finals, 2 contestants each week would advance to become part of the Top 14 contestants of the show.

It was revealed later that Ayman had missed the audition in Cairo, Egypt by one day & had one last chance to audition in Damascus, Syria.

Help us improve this page:   Correct or update the SuperStar second season page