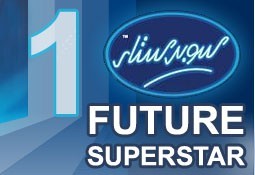 
The auditions for the program were held in Syria, Jordan, Egypt, Algeria, United Arab Emirates and Lebanon.

The Successful contestants move to Beirut where the number of contestants was 55. They all performed in the semi finals until the Winner was announced.

The contestants were judged by Elias Rahbani, Abdullah Al Kououd and Tonia Moreb.

The Two finalists with the most audience votes were chosen from each group to advance to the finals of SuperStar.

All shows featured famous guest stars including Sabbah Fakhry and Ragheb Alamah and many other famous singers from the Arab World.

In the final week of Super Star, Diana and Rouwayda toured their respective home countries to rally votes for the Grand Final, Diana Karazon won the first season of Super Star. It was said that more than 4 million votes were made in the last week only.

Help us improve this page:   Correct or update the SuperStar first season page