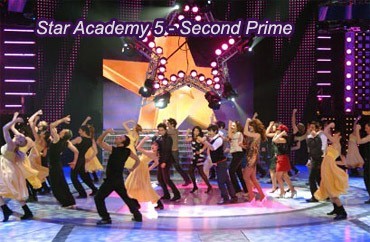 Hilda Khalifeh had a special appearance on stage from above.

Cheb Khaled was the first guest of the second prime of Star Academy 5.

Shada Hassoun winner of Star Academy 3 was the second guest.
The Top 5 students of the first week were:

The Academy paid the fees for the 15 credit hours which he dropped from the university, what a cheap prize! anyway it seemed that the prize meant a lot for
Moustapha Mezher and his mom at least this is how LBC wanted it to appear. in all cases, Congratulations Moustapha!

At the end of the 2nd prime of Star Academy 5, Omar Amer from Iraq was selected to leave the academy and so 19 students remain in the academy as of Feb 2nd 2008.