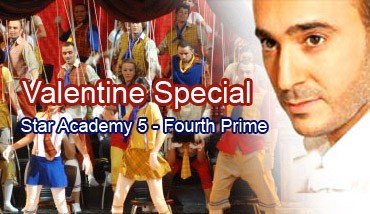 The fourth prime of Star Academy 5 took place on Friday February the 15th of 2008.

It was a special Valentine's Prime.

Saber Al Roubai was the first guest of the fourth prime of Star Academy 5.

The Top 5 students were
1- Abdallah Al Dossary from Saudi Arabia who won a vacation trip to London and a ticket to the lion-king theatrical play.
2- Saad Ramadan from Lebanon
3- Dia El Tayebi from Morocco
4- Mouhamad Qwaider from Jordan
5- Moustapha Mezher from Lebanon

by the end of the prime Khaled Bou Sakhar from Kuwait and Zaher Saleh from Palestine stayed at the Academy.

On the other hand, Fawaz Al Meal from Kuwait left the Academy.