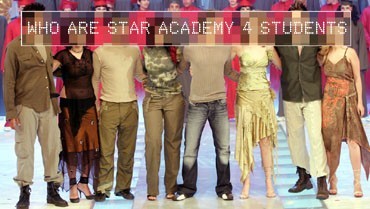 Even before the official auditions for Star Academy 4 started, names of already accepted students are being revealed.

While there is no confirmation yet, here is a list of names of the students that will be participating in Star Academy 4.
So lets wait and see if names are preset before the auditions or not.

Here is the list, and lets keep an eye open.

1. Fadi Neema is 16 years old male from Lebanon, he is Maya Neema brother and they look alike.

2. Tarek is 23 years old male from Syria, living in Kuwait. He is Shaymaa friend who appeared in one of the episodes.

3. Sefiyan is 23 years old female from Morocco, she has a nice voice and she is good looking.

4. Khalid is 22 years old male from Egypt, he comes from an Egyptian father and an American mother. Khalid lived in the United States.

5. Mountaser is a 23 years old male from Saudi Arabia, Mountaser plays the piano and the Oud.

6. Assil Omran is an 18 years old female from Saudi Arabia.