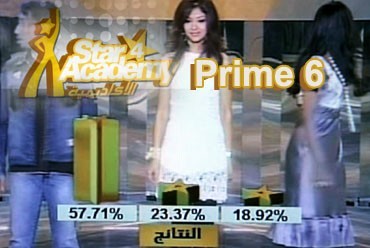 The Sixth Prime of Star Academy 4

It was not a very nice prime because it was filled up with a lot of old information about the students. A lot of talk about Ayoub and his trip to europe. It is good to note that Mohamed Kammah recorded song is very nice and can easily enter your heart and brain wash your head.

By the end of the Prime the audience votes revealed that Ali Al Saad got the most votes.

This left the students to decide between Iman or Shurouq.

Most of the students selected Iman Moulabbi to stay with them, and that was it. Shorouq Ahmad left Star Academy 4.

Best of Luck to Shorouq, we wish you all the best.

Help us improve this page:   Correct or update the The Sixth Prime of Star Academy 4 page