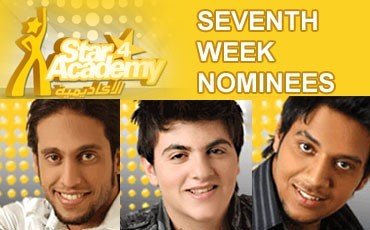 The seventh week nomination of LBC Star Academy 4 were announced:

It is very obvious that this week Dany Chamoun will leave the academy, We do love Dany a lot, but the rules of the game is that the weaker one must leave. Dany has not shown much effort to be creative or even to progress. Do you agree with me?

It also expected the Abdul Aziz Al Aswad will get the most audience votes, why? well just because he has all of the Kuwait people on his side.

Who do u think should leave the Academy on the 7th Prime on Friday 2nd February 2007.

Help us improve this page:   Correct or update the Seventh Week Nominees of Star Academy 4 page