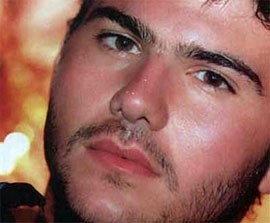 Samer Doumit was born on the 25th of December 1981 in Lebanon. Samer is the youngest among his three brothers Georges Doumit, Fadi Doumit and Ziad Doumit.

Samer worked as a waiter in a restaurant in order to afford the fees of his university.

Samer was among the top ten students at the Lebanese American University where he studied Graphic Design.
Samer received a scholarship from LBCI to continue his education.

Samer loves nature where he used to run to and find resort when he wants to get rid of life's cruelty and bitterness and to practice his favorite hobbies; skiing in winter and swimming in summer.

Samer Douhmit is very curious. He likes to travel and learn the secrets of life, civilization and traditions of countries.

Samer Douhmit curiosity lead him to participate in Star Academy 2 at the age of 23 where his trip into music started professionally.

Samer was a successful student; he challenged himself and other students.

Inside the Academy he established the White Flag with his best friend Bashar Ghazawi.

Both Samer and Bachar animated the nights and organize the events inside the academy which provided rich material for the daily updates on LBC.

All the candidates inside the academy were considering the voice of Samer as the best male voice at the Academy.

On the eleventh week week Samer left his dream at the academy to begin a bigger dream among the world of stars.

Help us improve this page:   Correct or update the Samer Doumit page