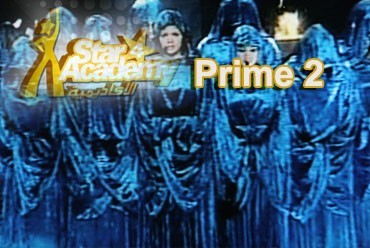 The second prime of star academy 4 lebanon started with the Students singing a Christmas song, in a Christmas decor and costumes.

The first guest of the second prime was Ramy Ayach.
Ahmad Dawood and Amal Lembary sang along Ramy one of his last year hit songs.

One of the nice themes of this prime was the Scottish dance and show which the students performed in a nice manner.

The 4 Cats group were the other guest of this prime, they sang their famous song, El Dounia Heyk, along with Nelly Maatouk.

Dalida Rahbani the 4th member of the 4 Cats group was not there because she recently got her twin daughters Christy and Cindy Rahbani, born. The twins were born to Dalida and Ghassan Rahbani.

The Top 5 Students of the first week were as follows:

This year money was introduced to encourage the students to perform.

however this money will only go to the candidate with the highest money amount throughout the whole 4 months.

Ayoub Al Zadjali won a ticket to Austria to visit his collegues from school.

Most Handsome Male Candidates
Ahmad Dawood, Carlo Nakhleh and Imad Jallouli were voted by the female candidates as being the most handsome men at the Acadamy 4.

Help us improve this page:   Correct or update the The Second Prime Week of Star Academy 4 page