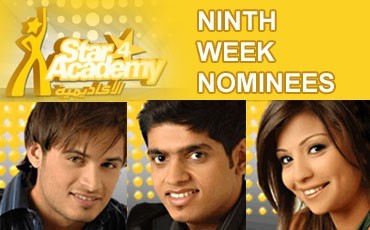 The Ninth Prime of Star Academy 4

The ninth prime had a romantic theme because its almost valentine’s day. All female students wore the red color to celebrate Valentine. Even presenter Hilda Khalifeh was looking so different this time with a hot red lipstick.

Right after this beautiful performace, Imad, Amal, and Sally appeared on stage and they all sang Ma Badak Neba Habayeb. Then it was the turn of Marwa and Mohamed Kammah together.

The Indonesian singer appeared on stage later on with Shaza and they both performed a beautiful song.

Tina Yamout and Carlo Nakhleh had their own romantic tableaux which was unforgettable.

Iraqi singer Rida El Abdallah sang along with Shaza, the Iraqi student in the academy.

Mohamed Kammah won the friend of the week title, and he got himself whatever food he wants for a full week at the academy. Sahtin Mohamed.

Another amazing song worth mentioning was performed by all the students who dressed up in black as they sang a song about Al Kods.

Almost by the end of the prime 9, Ahmed El Sherif appeared for the third time and he sang his famous song, Sahran Maaki El Lela along with Imad.

Then it was time to announce the audience votes who favored Ahmad and gave him the most votes. It was very stressful for the students to vote for their favorite students, especially Tina Yamout who cried a lot as she drew history by selecting Ayoub to stay and so Abdul Aziz Al Aswad left Star Academy 4.

It was expected anyway because Abdul Aziz Al Aswad was not really working as hard as he should.
Best of luck Azouz and we wish you the best in the world of fame.

Help us improve this page:   Correct or update the The Ninth Prime of Star Academy 4 page