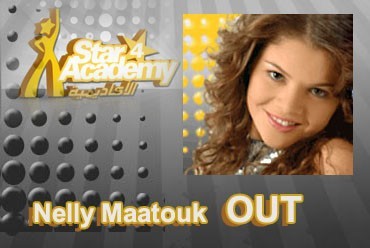 As was expected Nelly Maatouk from Lebanon finally left the Academy after her fourth Nomination.

Presenter Hilda Khalifeh announced the results of the audience votes for the fifth Prime of Star Academy 4.

It seems from the above results that people do love Abdul Aziz Al Aswad, because he got a huge amount of voting compared to Dany or Nelly.

Nelly Maatouk got the least audience votes, even her friends said sorry, and voted for Dany Chamoun, who was saved and stayed at the Academy.

Best of Luck to Nelly Maatouk, who stayed at the Academy for 4 weeks and was nominated 4 times too.