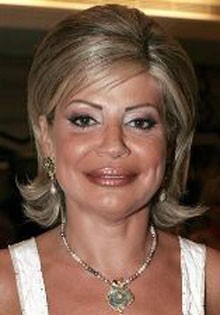 May Chediac also spelled as May Chediak or May Chidiac is a Christian Lebanese journalist and TV Personality. May Chediac worked for the Lebanese Broadcasting Corporation - LBC Group, where she was a television anchor.

Her first appearance was in the early 90s in Kalam Massoul along with Marcel Ghanem, a Political Show which lasted for two years.

September 25, 2005, May Chediak was seriously injured in a car bomb incident in Jounieh. The bomb which nearly killed her was a one-pound explosive that detonated as she entered her car. May's left leg below the knee was blown off and her hair and clothes were set on fire. Following the amputation of her severely injured left arm, May became in a stable condition and soon recovered from her ailments.

May Chediak is a known partisan of extremist right-wing christian group Ouwet (Lebanese Forces party) and is very admirative of warlord Samir Geagea. May was usually critical of Syria, a neighboring country to Lebanon which until April 2005 had stationed troops in Lebanon. Her assassination attempt came as part of a long studied conspiracy to destabilize Lebanon and Syria, which began with the death of Rafic Hariri. May was therefore picked as a perfect strategic target, as she had hosted a talk show in which she voiced fears over increasing violence ahead of the UN report on the death of Rafic El Hariri. May Chediak's story and name was exploited to the max; for a while the International Media such as CNN and BBC closely followed her news (from the day she was hit by the blast till she returned to Lebanon.) The UNESCO even awarded her the UNESCO/Guillermo Cano World Press Freedom Prize in recognition of her courage in defending freedom of the press on the 3rd of May 2006.

The blast which hit May was one of a series of bombings in Lebanon targeting critics of Syria, in which one other prominent journalist, Samir Kassir, and anti-Syrian politicians including George Hawi and Gebran Tueni, editor and publisher of the daily newspaper, An-Nahar, have died in similar explosions.

On the 25th of November, May appeared on LBC Television, defiant, smiling and promising her return to the media and journalism.

May chediac traveled to France to continue her treatments and her surgeries.

On the 27th of January, 2006 May announced her candidacy for the vacated Maronite seat in Lebanon's Baabda Aley by-election in a televised interview.

May then returned on Television for a short while in a Political Program entitled Bikol Joraa, which was broadcasted on LBC Sat, LBC Europe and LBC Americas right after the Night News.

But May had lost a lot of her viewers as she became even more biased and short-sighted as she ever was, another hit to her credibility as a journalist.

She has struggled ever since in vain to make a notable come-back, and despite her TV appearances as a guest on TV shows, she is yet to regain her stance as a reliable talk show host or political analyst.

She also seemed to blindly blame all those she disagreed with (politically or otherwise) for her misfortune, and it showed in her anxious and unstable personality. In an incident in May 2011 while she was a guest of Rabia Zayat on Al Jadeed TV, Chidiac cut short the interview and left the set because she did not like the questions of the host. She had accepted to come to the show just to market herself and wanted the producers just to focus on her trips to the USA. But at one point, the presenter asked her a few other questions and this angered Chidiac to the point that she asked for a break to go to the WC, and never returned.
When the producers tried to calm her down, she reportedly started screaming and accusing Rabia (who comes from the south of Lebanon) of backstabbing her and trying to settle personal scores with her based on her political background and that she was not to accept it...

Rabia had asked her about her stance from Hizbollah from the viewpoint of the people of the south. Rania Yazbeck the producer of the show commented "May preaches to us that there should be no suppression of freedoms, would she accept someone telling her what she can or cannot ask?!"

Help us improve this page:   Correct or update the May Chediac page