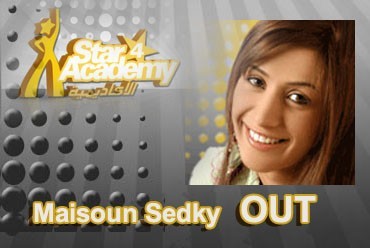 Presenter Hilda Khalifeh announced the results of the audience votes for the fourth Prime of Star Academy 4.

It seems from the above results that people do love Maisoun, because she still got relatively good votes despite her nomination for the third time.

Nelly Maatouk got the least audience votes, and this not good for her future nominations. It is important that Nelly works hard or else she will be out of the academy in no time.

Nelly Maatouk was selected by the students to stay at the Academy.

Maisoun Sedky was kicked-out of Star Academy 4 on the fourth prime and on her third successive nomination.

Best of Luck to Maisoun Sedky