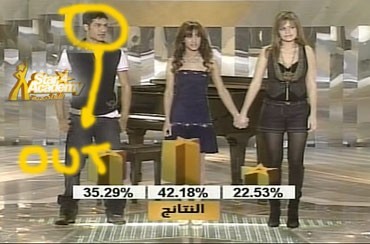 The results of Star Academy 4, Second Prime kicked Khaled Fardan from Bahrain out of the Show.

The students had their word, with 7 votes to Khalid and 9 votes to Nelly.

Nelly Maatouk from Lebanon was saved by her friends at the academy.

Khalid Fardan left the academy for good after spending only 7 days at the show.

Best of luck to Khalid

Help us improve this page:   Correct or update the Khaled Fardan leaves Star Academy 4 on Prime 2 after 7 days at the Academy page