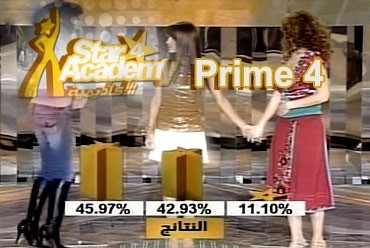 The Fourth Prime of Star Academy 4

The fourth Prime of Star Academy 4 was very special as it hosted 3 different guests.

Arab Singer, Jawad El Ali was the first to appear on stage along with Shada Hassoun and Ayoub Al Zadjali. The three sang Hayghilak Yom.

The second guest was Lebanese Canadian popular pop-singer Massari who with Tina Yamout and Ahmad Dawood.

The nominees of the 3rd week appeared on stage and they all sang Souna Ya Sounson.

The Friends of the Week for Star Academy 4, Prime 4 was Sally. Sally won a ton of bananas. Sally was overwhelmed to find this surprise.

Carlo Nakhleh, Iman Moulabbi and Amal Lembary performed a special tableau of stars on the cover of magazines.

A Big surprise awaited Sally when her mother and brother appeared on stage.

A Special reportage was about Carlo Nakhleh and the special evening he spent with his girlfriend Andrea on New Years Eve.

Arab Singer, Jawad El Ali sang the last song of Prime 4 along with the Students.

Finally the time of truth came along as Presenter; Hilda Khalifeh announced the results of the people’s votes.

Shorouq Ahmad got the top audience votes, while Nelly Maatouk was selected by the students. Leaving the unlucky, Maisoun Sedky out of Star Academy 4 on the fourth prime.

Help us improve this page:   Correct or update the The Fourth Prime of Star Academy 4 page