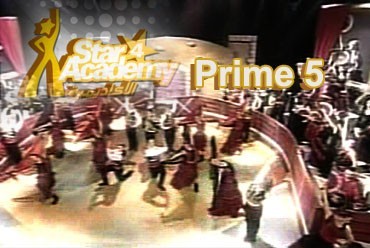 The Fifth Prime of Star Academy 4

The second host of the Prime was French Tunisian singer Laam who performed along with Iman Moulabbi, Tina and Carlo Nakhleh.

Dany Chamoun and Carlo Nakhleh sang the famous song Viva Espana in a tableau from Spain.

The third host of the prime was George El Rassi, he sang with Shada Hassoun, Mohamad Hammah and Amal. Unortunatly this song was not that good for the students, as the tone of voice of George is much different than the rest of the students who sang with him.

The Friend of The Week for Prime 5 was Tina Yamout, who was very happy to see a video of her boyfriend Rabih. It was a bigger surprise for Tina to know that she will meet Rabih out of the Academy.

Carlo Nakhleh, Laam sang Killing Me Softly along with Michel on the Piano.

The audience voted for Abdul Aziz Al Aswad from Kuwait, while the students selected Dany Chamoun to stay at the Academy.
Nelly finally leaves the Academy after her fourth Nomination.

Best of Luck to Nelly Yamout from all the staff of Lebanon Links.

Help us improve this page:   Correct or update the The Fifth Prime of Star Academy 4 page